The IBM Cloud console provides the web front end for IBM Cloud, an open and secure public cloud providing enterprise-class IaaS and PaaS capabilities with over 170 managed services covering data, AI, IoT, security, blockchain, and more. I’ve had the pleasure of working on the console for most of the last decade. As a more junior developer, I wrote the first lines of proof-of-concept front-end code before IBM Cloud even had a name. This cloud was made generally available as IBM Bluemix in 2014, rebranded as IBM Cloud in 2017, and incorporated the fully integrated SoftLayer experience in 2018.

I became the lead full-stack architect in 2014, and had the opportunity to work with a countless number of talented developers, UI designers, and offering managers as the console’s architecture and user experience (UX) were regularly updated and improved to keep pace with the maturing IBM Cloud. Last year, I left this amazing team for another role as an architect on the IBM Cloud for Financial Services. As I reflect on the experience, I’ll share with you how the console architecture has evolved from its monolithic origins into a highly scalable, modern microservice-based system composed of dozens of micro front ends. In particular, I’ll highlight the critical role that Node.js played in this evolution. 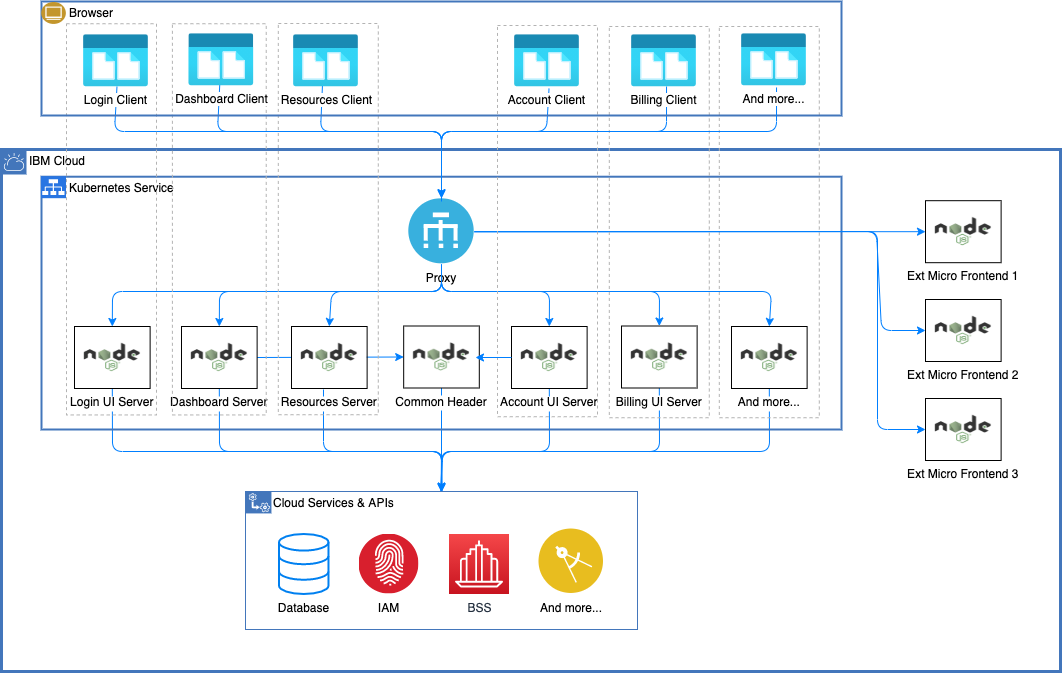 Earlier this month, we launched a revamped IBM Cloud Platform Experience at our new cloud.ibm.com location. Our primary goal was to unify our IaaS and PaaS offerings to better meet your needs. This was a massive undertaking with changes up and down the stack. Prior to this unification, there were two distinct UI's at different URLs -- one for IaaS and one for PaaS. This understandably led to a lot of frustration and confusion. We wanted to fix this by creating a seamless experience with one UI at a single URL to manage everything. We're very excited by the outcome, and we think you will be too. Continue reading